Tomb of Madin Sahib in Srinagar 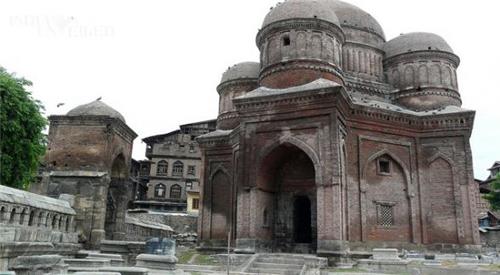 The tomb of Madin Sahib is one of the most beautiful mausoleums built in 15th century AD. It is located to the north of Madin Sahib Mosque in the Zadibal region of Srinagar.

Who was Madin Sahib?

Madin Sahib was born as Syed Mohammad Madani and lived in Medina. He accompanied Timur when the latter invaded India in 1398. At that time, Kashmir was ruled by Sultan Sikandar Butshikan (1389–1413 CE). Timur sent Syed Mohammad Madani as his envoy to Kashmir. However, the Sayed liked the place so much that he decided to settle down in Kashmir permanently.

Very soon he met Syed Mohammad Hamadani and became his disciple. He first settled down in Rainawani region of Srinagar. Later he moved to Nowshahar area. He died on 13th October 1445 and was buried in Zadibal.

The Tomb of Madin Sahib

The tomb of Madin Sahib is an attractive building built in the 15th century style of architecture prevalent in Kashmir. Its outer wall was earlier decorated with glazed tiles, most of which have been removed by miscreants and sold for profit. Fortunately, some of these tiles have been preserved in Pratap Singh Museum in the city. In addition, few such tiles are still visible on the archway jams and in the spandrels of the door. It is not really hard to visualize from them how very splendid the tomb looked when the whole of the exterior wall of the mausoleum was covered with them.

At the Entrance of Madin Sahib 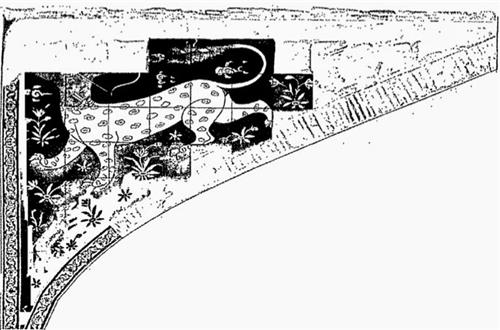 However, the architectural splendor of the tomb is not totally lost. At the spandrel of the entrance you will come across a well executed representation of half man and half beast in glazed tiles. It is around four feet tall. While the lower part represents a leopard, the upper part is of a human being. The figure has a bow and arrow in his hand and is shooting at his own tail, which is similar to a dragon’s head.  More interestingly, if you look carefully, you may find him to bear a heraldic attitude. Nearby, a fox is gazing at “cloud forms”.

In all, it represents a queer but colorful picture. Indeed, the background of this artwork is blue while the human form is read and leopard is yellow with green spots. In addition, the tail part as well as the fox is reddish brown. There are also flowers of different hues scattered all over.  Another striking example of wall decoration is to be found just above the dado in the east façade of the building.  There you see a narrow border made up of flowery patterns intercepted by heads of lions and donkeys. Inside the tomb, you will find religious texts inscribed on the wall. 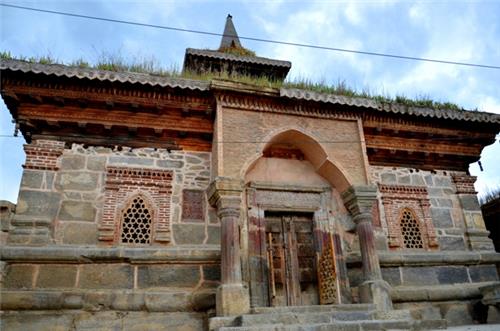 Close to the Tomb of Madin Sahib is the Madin Sahib Mosque. It was built by Sultan Zain-ul-Abideen (Budshah) in 1448 for Syed Mohammad Madani. The mosque is perfect blend of Hindu and Muslim architecture. In fact, it is believed that many elements from old Hindu temples such as pillars and bases have been incorporated in the mosque.  Unfortunately, the mosque is mostly kept under lock and key and therefore, you can only have a glimpse of the mosque from outside. You can also seek special permission from the authorities and visit this ancient wonder.