Apart from the scenic beauty and the mesmerizing sights another important attraction of Srinagar, which the tourist can enjoy a lot is the Kashmiri cuisine that is famous in this summer capital named Srinagar. Kashmiri food in Srinagar has a wide range and it encompasses a simple meal to a grand 36-course wedding meal called Wazawan. There are a number of local delicacies in Srinagar that should be tried out for sure by the tourists and the visitors who want to have a nice time in Srinagar. 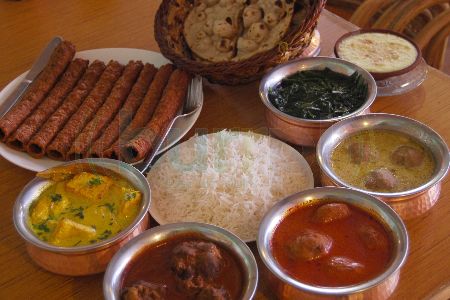 Rice is the staple food in Srinagar, and there is a special variety of sticky rice found in Srinagar that is hugely popular across the valley. Non- vegetarian diet is very popular in Srinagar as that provides the locals with the much needed heat during the winters. Mutton, fish and chicken are very widely used in the daily meal preparations. 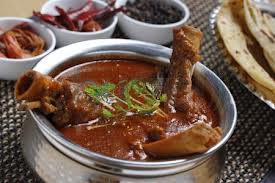 Vegetables and mutton are often cooked together and delicious dishes are doled out. There are a few pure vegetarian dishes that are also very common and popular in Srinagar. They are paneer or cottage cheese cooked in thick sauce, different varieties of potato dishes like dum aloo or potatoes roasted in gravy of curd etc. The Wazwan banquet will have around two to three vegetarian dishes in its menu and the rest of the dishes will all be of the non vegetarian variety. 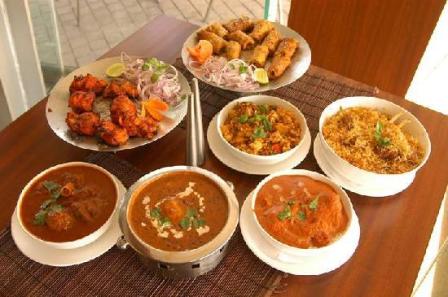 The cuisine in Srinagar, does not have too much presence of sweets of desserts in it. However, there are a few beverages that are very popular in Srinagar and are used by people to wash down a heavy meal that they would have consumed in a marriage or in general. Kahwah is a popular green tea served in Srinagar that finds its existence in every household of Srinagar. Restaurants also serve Kahwah and some of the famous cafes that serve rich and aromatic Kahwah are Cafe Robusta and Cafe Arabica that are located on the M.A. Road. Kahwah is prepared by boiling some green tea leaves in water and is garnished with dry fruits like walnuts and almonds and it gets its share of royal treatment due to the addition of Kashmiri Saffron.

Another special beverage is the Noon Chai that has a salty taste.  Noon is a special salt in Srinagar that is added to the tea made by boiling green tea leaves in water along with milk and soda bicarbonate.

Mutton sheek kabab or Tujji and another form of Indian bread known as Kashmiri Naan are some of the specialties that is prevalent in the cuisine found in Srinagar.  The Kashmiri Naan is made as bread that has a lot of nuts and sultanas baked into it. In addition, the Tujji or mutton tikka is made by cooking some soft pieces of mutton in charcoal after they are fixed onto a piece of rod and marinated with some local spices. Tujji served with a condiment of mint and bread known as lavas are very popular in Srinagar. 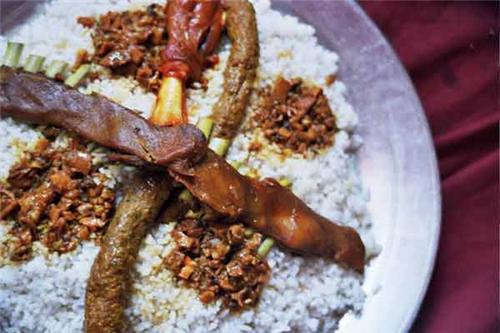 There are a number of food joints and restaurants in Srinagar that serve awesome food. Khyam Chowk, Lambert Lane, Shervani Road and Boulevard road has some of the best eateries in Srinagar. The mutton tikka at Challi Point is very famous in Srinagar. There is an entire street in Lal Street that is dedicated to food and is located near the KMD Bus Stand in Srinagar.

Therefore, if you are a gourmet you will have a ball of time in Srinagar as you can relish a lot of local delicacies that can prove to be mouth watering treats for your taste buds.