Kashmir Valley is known for its blending of multiple cultural and rich heritages. Apart from being an important city of Kashmir Valley, Srinagar is known for its geographical and historical importance. Srinagar, the summer capital of Jammu and Kashmir State, is also known worldwide for its unique handicrafts and handloom products. Kashmir Region used to be an important learning center of Persian and Sanskrit Languages. It is also the center of origin of Indo-Aryan Civilization which flourished to a great height. When Islam got introduced, this region embraced Islam too and most of the cultural aspects of Srinagar bear the traditions of Islam. This document has information about culture of Srinagar including its people, traditional foods, traditional songs and dances, art and craft and various handicraft products.

People of Srinagar are simple living and warm. They treat their guests with lots of love and care. People of Srinagar are great patrons of arts and crafts and many of the traditional art forms, music and dances are still practiced here. Dresses worn by the people of Srinagar reflect their culture and lifestyle. Women wear colorful dresses and wear jewelries like nose rings, earrings, bangles, necklaces and others. 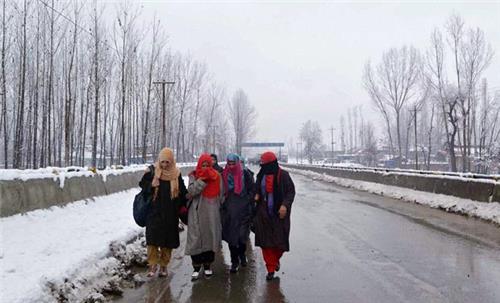 Most of the inhabitants of Srinagar are Muslims. Islam being the major religion of Srinagar, Hinduism and the Buddhism are the other two religions followed in Srinagar. Muslims are divided into two groups- Shiyas and Sunnis. Hinduism is the religion followed by the Kashmiri Pandits and the nomadic Gujjars. Some places of worship for the Muslims in Srinagar are Jama Masjid and Hazratbal Mosque. Shankaracharya Temple is the famous temple of Srinagar.

Staple food of people of Srinagar is rice. They take rice with side dish that is prepared combining vegetables and meat together. Chicken, mutton and fish are cooked with different types of spices. The popular combination is lotus root and fish; spinach and chicken. Dum-aloo is the pure vegetarian dish which is popular in other parts of India and the world as well. Dum aloo is made by roasting potatoes in curd-gravy. Another famous veg dish is fried paneer in which paneer is fried in sauce.  Kahwa or Green Tea of Srinagar is very famous. During festivals, wedding or other special occasion, traditional meal called Wazawan is served. For Wazawan, the commonly served dish is ‘Rista’, a dish prepared with fried meat-balls in gravy. Rogan Josh, mutton with deep red –colored curry; Seek-kabab; and Yakhni are also served at Wazawan. The menu of Wazawan ends with Gushtaba, meatball cooked in thick curb gravy. 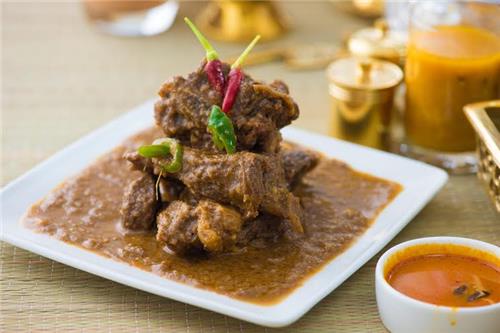 Wazawan is offered at many restaurants of Srinagar such as the Ahdoos and Grand on Residency Road; Mughal Darbar at Shervani Road, Ruby located in Lamber Lane, Juniper hotel in Lal Chowk and Broadway Hotel  on Maulana Azad Road of Srinagar. Srinagar also ho uses many bakery shops where special Kashmiri bread such as ‘Baqerkhani’ and “Sheermal” are available. Any authentic Kashmiri breakfast is incomplete without these brads. Pastries and patties prepared in bakeries and coffee shops of Srinagar are also worth to taste. Eat Here

Arts and Crafts of Srinagar

Kashmir boasts its endless treasure of handicrafts and handlooms. The arts and crafts of Srinagar have been enriched since the ancient time as it offered the locals to intermingle with each other’s culture. Srinagar got habituated by the Persian, Tibetan, and Mughals and the arts and crafts of the region got influenced by these cultures. Traditional items from Srinagar are in great demand from tourists all over the world. Pashmina Shawls and dress materials are the most popular items of Srinagar. Carpets and hand-woven rugs, woolen items, jackets, embroidered Phirhan and scarves are some of the other handloom works that one could exclusively get in Srinagar. Namdas and sarees, dress materials with Naqqashi work are also bought in great numbers by the tourists. Silk sarees and other silk materials, embroidered handbags, purses, files are also the specialties of Srinagar. 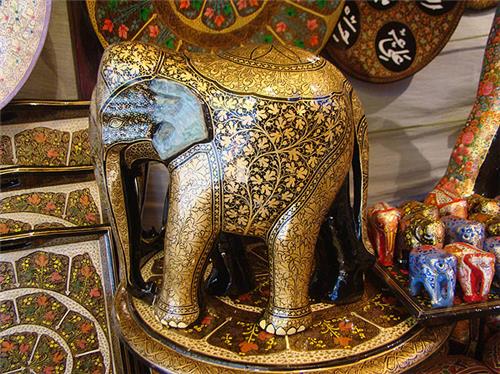 Fairs and Festivals of Srinagar

The festival time amalgamates people from all spheres of life and of all castes and creeds to gather together and share happiness. The festival time represents a colorful mosaic of people and their culture of this region. Find here the information about various fairs and festivals of Srinagar.

Festivals of flowers are celebrated in different parts of India and Tulip Festival Srinagar is one of its kind festivals where captivating Tulip Flowers attract people with from all corners of the world. Srinagar houses the largest Tulip Garden of Asia. Tulip Festival is organized at Indira Gandhi Memorial Tulip Garden located in Srinagar at the base of Zabarwan Hill Range. 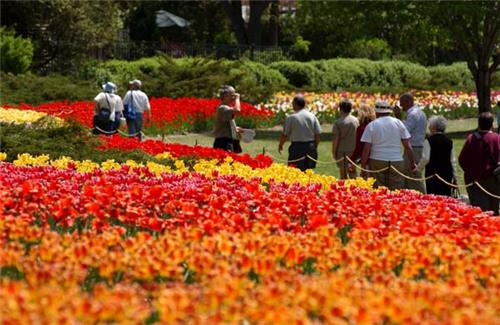 Tourists enjoy the breathtaking sight of colorful Tulip of all types in this garden that overlooks the beautiful Dal Lake. On the occasion of this festival, cultural programs are organized, handicrafts shops are set up and many other forms of Traditional Kashmiri arts are showcased. This festival is held in the month of April in the first fortnight.

Shia Muslims of Srinagar celebrate Navroz Festival with great pomp. The festival is celebrated for nine days and it is mandatory for the Shia Muslims to go to Mosque to pray. After the prayers are over, people hug each other and exchange greetings. During this festival Shia Muslims visit their friends and relative to wish them. Special dishes like Biryani, Phirni and Kababs are made on this occasion. The traditional drink of Navroz Festival is Faluda that is prepared with milk and rose syrup. This occasion is celebrated to commemorate the birthday of Prince Ali Muhammad.

Every year in the month of July, Gurez Festival is celebrated which is mainly a festival of Gurez tribe of Srinagar. On this occasion traditional folk songs and dances of Gurez Tribes are performed. People from all over Srinagar participate in this festival and many tourists come to Srinagar to witness the celebrations of Gurez Festival. 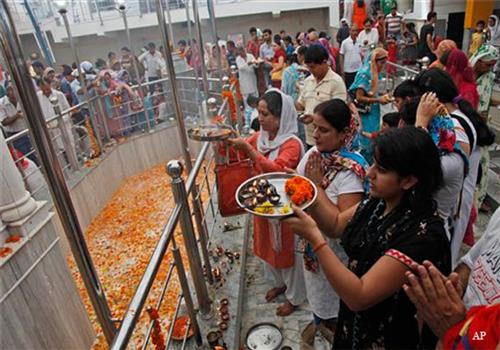 This festival is celebrated in the month of June on ‘Jaistha Astami’ Day to commemorate the birthday of Kheer Bhawani Goddess. On the eight day of the full moon of June Month, devotees gather in the temple premise to offer their prayers to Devi Ma. Devotees fast on the occasion and offerings of lamps, flowers and kheer (a sweet dish made with milk) is made to Devi Ma. This temple was established by the then King Maharaja Pratap Singh in the year 1912.

Everyyear Urs Festival is celebrated to commemorate the death centenary of Islamic Saints. During this festival Muslims are not allowed to take meat of any kind. In Srinagar, many non-Muslims also celebrate Urs Festival and do not take any non-veg dishes during this period.

Ramzan Festival is the festival when Muslims fast for a month and they break their fast with Eid ul Fitr Festival. Ramzan falls on the 9th month of the year as per the Islamic Calendar. This festival is celebrated to mark our love and affection for the deprived and poor people. Devotees observe fast throughout the day and do not even drink water during this time. People do not drink alcohol and smoke during Ramzan. They eat food only after sunset. The Holy Quran is read in mosques and at homes.

One of the most important of Muslims, Eid ul Fitr is celebrated with joy in entire Srinagar. This festival is celebrated after one month fasting during the Ramzan Month. People gather at mosques and many other places for community prayers. Members of the family meet each other, people visit their friends and acquaintances and wish them Eid Mubrak on this occasion. 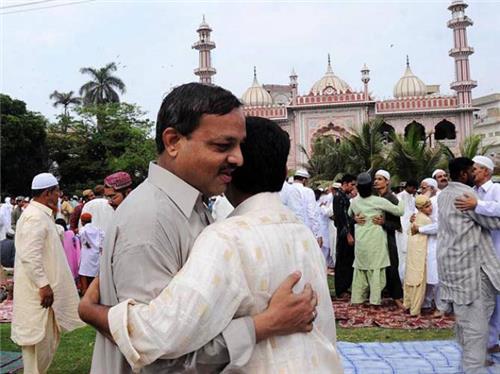 Special foods are made and people wear new clothes and have meals together.

Mughal Gardens of Srinagar is the venue for Gardens of Paradise Festival. On this occasion, cultural programs are organized and traditional songs and dances of Kashmir are performed by the local artists. Food stalls having authentic Kashmiri foods and many other food items are also set up on this occasion.

In the month of July/august Shikara Festival is organized in Srinagar. The venue of this festival is the placid Dal Lake. Visitors enjoy rides on beautifully decorated Shikaras, the traditional boats of Kashmir.

Saffron Festival is celebrated in the last week of October in Srinagar, the place that is one of the largest producers of saffron in the world. Kashmiri Saffron is famous throughout the world for its texture, aroma and color.

Dances and Music of Srinagar

Srinagar boasts many types of performing arts including different traditional dance and song forms. One such is Bhand Pather which is a type of traditional theater where dance and play is combined together to represent evils of society in a satire form. Chakri is a very popular traditional music of Kashmir which is still practices in Srinagar. Instruments like Sarangi, Graha, Rabab and Harmonium are used to perform this music. Sufi Music of Kashmir is not only practiced in Srinagar and its adjoining areas but it has got worldwide fame nowadays. 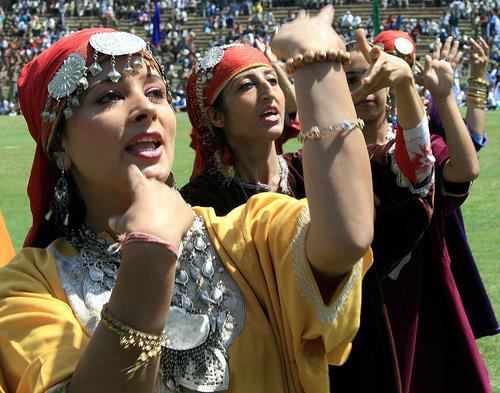 This music form has its origin in Persia. Various instruments used while performing this music are Tabla, Sitar, Santoor and Kashmiri Saz. Hafiz Nagma is a dance form performed with Sufiana Music. Another famous dance form of Srinagar is Roug which is performed during festivals and special occasions. Habba Khatun Songs are also very popular form of traditional music.

Srinagar showcases rich heritage and cultural rituals and blends the traditional practices with the modern ones. Due to the deep cultural foundation of this place and the warmth and hospitality of the local people, Srinagar attracts thousands of tourists every year.